Zinc sulfide (obtained from elemental zinc and sulfur for electroluminescent panels) was one of the first film deposited by ALD in the 1970s. However, sulfide materials remain still under-researched and represent today less than 10% of ALD articles published each year. The needs for photovoltaic applications, but also for energy storage, catalysis and nanophotonics, have prompted research on this type of materials. Particularly in the field of photovoltaics, indium and zinc sulfides are used as a large gap material for thin-film solar cells. Other sulfide materials, such as CZTS (Cu2ZnSnS4) or SnS are accessible by ALD and very interesting as absorbers. Finally, quantum dots of CdS or PbS or In2S3 synthesized by ALD and used in solar cells are other very recent advances of the domain. Sulfide compounds are used also as electrode materials or electrolytes for batteries. Finally, the discovery of the particular properties of 2D type chalcogenide materials also supports the development of ALD deposition sulfides.

As for the ALD oxide, precursor chemistry is critical for controlling the growth and properties of deposited films. The toxicity of H2S, (the most common source of sulfur) requires special attention, and some teams are working on its substitution. In addition, many cation exchange mechanisms and rapid sulfide-specific diffusion processes take place. These materials also have a potential for the manufacture of ternary materials such as oxysulfides (Zn(O,S), In2 (O,S)3 , (Zn,In)xSy, or CuInS2 can be obtained by altering the ALD sequence, thus understanding the process and mechanisms of sulfide growth is essential and an active research area. 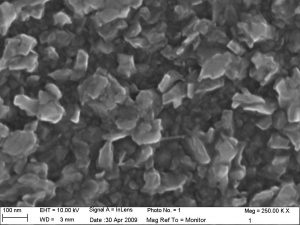