Due to their electroluminescence, the sulfides were the first materials grown by ALD (see http://rafald.org/fr/sulfures-2/). Then metal oxides have become the most numerous ALD processes. Among them, Al2O3, TiO2 and ZnO are widely used in the scientific community. They are even considered as cases of study to explain the ALD mechanisms because their chemistry is well controlled. In industry, it is HfO2 that is the most used since it exhibits very good dielectric properties. In opposition to the usual recipes, in which organometallics are employed, HfO2 is deposited from a chloride (HfCl4). The oxygen sources are various. Water vapor is obviously the main one but many recipes are performed with O2, O3, H2O2 and rarely N2O et N2O4. Like for the other type of materials, plasma-assisted processes improve often the quality of the oxide films.

Oxides have applications in numerous fields and the range of deposited materials is increasing. Al2O3, TiO2 et ZnO are often used first to demonstrate the interest of such oxide films. For instance, alumina has been used to encapsulate OLED devices [1], to passivate surface states in photovoltaic cells [2], to stabilize electrodes in Li-ions batteries [3], as dielectric in ultra-capacitors [4] or as sacrificial material to fabricate 3D nanostructures [5].

The number of available oxides is now large and addresses better the various challenges of the different application domains. In microelectronics, Ta2O5 et Al2O3 are used as stacks in CMOS sensors. In photovoltaics, Al-doped ZnO or SnO2 are transparent conductive electrodes and diverse oxides (Ta2O5, MoO3, In2O3, ZnO, Al2O3, TiO2, SiO2…) are used to passivate contacts in the cells. Fe2O3, WO3, NiO, Co3O4, TiO2 are employed as electrodes for water photosplitting. Thin layers of MnO2 show interesting properties for electrocatalysis. In the field of fuel cells, ultra-thin layer can be grown to protect the metallic catalyst (e.g. Al2O3) or ionic conductive oxides can be synthetized. V2O5 has been grown to be used as cathode in Li-ions batteries. This last field illustrates properly the current tendency to deposit complex oxides such as LiFePO4, LiNbO3, LiCioO2 or SrTiO3 for other applications.

In general, as for the other type of materials, the ALD process is used to grow mainly thin or/and nanostructured oxide films rather than bulk materials. 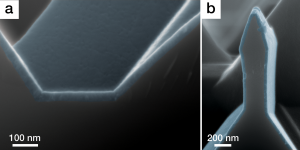 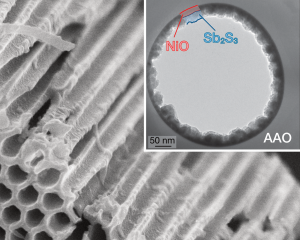