Although ALD is typically used for the synthesis of oxides nanomaterials, it has been shown that nitrides and metals can also be prepared using this technique.1–3

Transition-metal nitrides by ALD find their use both as metal diffusion barriers and as gate metals in the semiconductor industry, but nitride films open prospects for other applications as well, such as energy storage and catalysis. The intrinsically harsh characteristics of nitrides make their synthetic protocols difficult. ALD of TiN, one of the most studied nitride ALD processes, can be achieved using TiCl4 as the metal precursor and NH3 as the reducing agent/nitrogen source. Other nitrides have been prepared by ALD, such as TaN, W2N, MoNx , NbN, TiSixNy, BN and TiAlxN, using NH3 as the main co-reactant for these materials.3

The reactions mechanisms taking place for ALD of metals are quite different from the “close-to-ideal” binary compounds case. One difference is that in metal ALD, the deposition of a metallic material containing only one single element needs to be achieved. Furthermore, in the ALD of metals, the start of film growth on most of substrates is more difficult than for other ALD processes, as it usually initiates with the formation of isolated islands at the surface. This lack of uniform nucleation can however be advantageously applied for the production of supported nanoparticles (NPs).4,5 These NPs grow with increasing number of cycles, coalesce and finally form a continuous film on which the ALD growth continues at a constant rate. ALD has been mainly applied for the preparation of noble metals such as Pt, Ru, Pd, and Ir,6 but transition metals such as Cu, Co, Fe and Ni have been deposited as well.7 ALD of metals can be applied to the fields of microelectronics and catalysis, among others. 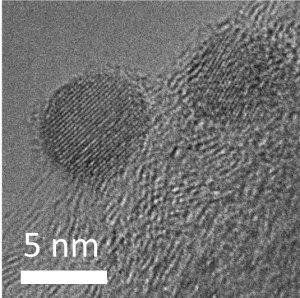