In the 1970s, the demand for electroluminescent material thin films contributed to the emergence of the ALD.1 Ultra-thin films found then many applications, in microelectronics at first and later on in photovoltaics or in energy area such as in lithium batteries and fuel cells, for instance, promoting the ALD.2 As this technique permits depositing various materials (e.g. oxide , nitride, metal, hybrid ...) often at relatively low temperature (ambient-300 ° C) onto either planar or highly structured substrates, well-controlled functional nano- and hetero-structures can be fabricated.3 Recently, novel ALD applications have emerged such as in areas ranging from medicine to renewable energies, including environment and technical textile domains. The rising of ALD fabrication of 2D materials and MOFs (metal organic framework) is also noticed.

As an example, the wetting properties (hydrophobic or hydrophilic behavior) of cotton fabric can be tuned using surface modification by ALD.4 Moreover, by precise tuning surface chemistry (functionality, polarity, ...) and pore size using ALD coating, functional membranes are fabricated and applied for selective gas separation, filtration, DNA and RNA sensing or and cellular signaling.5 ALD coatings are also useful for medical implants, bio-sensing and diagnostics.6 For instance, low temperature deposition of TiNOx on cellulose fibers allows its use as biocompatible material and permits good adhesion of cells such as hADSC. ZnO-based antimicrobial coatings and non-enzymatic biosensors for glucose detection are another couple of examples in the medical field.

On the other hand, novel applications in environment and energy areas are also investigated. In particular, ALD is employed to improve electrode stability and performances toward water splitting and osmotic energy conversion using ALD modification of membranes is reported. In addition, nano- and hetero-structures based on BN have proved to be effective for water purification.

Finally, photonic and gas sensor materials remain rather confidential, even though investigated since many years and the high potential of ALD to both fields. 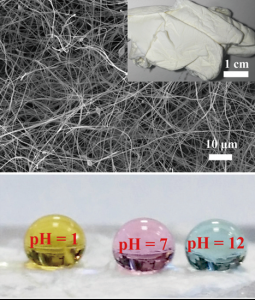 Picture and SEM observation of BN nanofiber textile, fabricated from PAN nonwoven and modified by ALD. The high hydrophobicity can be used to filter or absorb solvant in water treatment. (LMI)